Type in the item you’d like to search for below

Hundreds of students gathered at the MAC Center, on Kent State University’s (KSU) campus in Kent, Ohio. They were there to cheer on their Basketball team, the Golden Flashes. To enhance the excitement of this winning team, the KSU Athletics and Marketing departments contacted the Production team at Vincent Lighting Systems to provide a pre-game light show.

Hundreds of students gathered at the MAC Center, on Kent State University’s (KSU) campus in Kent, Ohio. They were there to cheer on their Basketball team, the Golden Flashes. To enhance the excitement of this winning team, the KSU Athletics and Marketing departments contacted the Production team at Vincent Lighting Systems (VLS) to provide a pre-game light show, filled with beautiful lighting and exciting effects. We were able to demonstrate how our consultative approach, reliable partnerships with other suppliers, top quality lighting and rigging inventory and experienced ETCP-certified technicians all contribute to a successful show.

While the audience sees a seamless show, there are many layers of preparation involved — and hours spent — to properly discuss, plan and prepare for such an event. Production Managers and Technicians often spend regular business hours in pre-production meetings to establish project goals, preparing equipment in one our three warehouses, and transporting the equipment to jobsites. This level of preparation and constant communication both inside and outside of our company, help the ETCP-Certified technicians at VLS produce the best event lighting.

Watch the video below

When Kent State University’s Athletics & Marketing approached Vincent Lighting Systems to liven up their pre-game activities, they had three main challenges: 1. Increase visibility of KSU’s men’s basketball games to attract students, 2. Create a dynamic and exciting light show to pump up spectators, and 3. Reinforce the KSU brand and promote the launch of a rebranding. VLS was up to the challenge.

The VLS Rental and Production department works nearly around the clock and most days of any given week to create lighting for special events all over the Midwest. The VLS Production team is no rookie when it comes to lighting athletic events. We have provided lighting for sporting events in arenas and stadiums throughout Ohio, Kentucky, and Pennsylvania, with clients that include high schools, universities, and professional teams. From dodgeball tournaments to figure skating to athletic awards banquets — and of course sports events — it was obvious that VLS would have the skills and experience to light the Kent State Basketball pregame show.

Because of this expertise and past success working with the university, the KSU Athletics and Marketing teams called on VLS to enhance the atmosphere leading up to the beginning of their basketball games. VLS Production Manager, Derek Hons, sat down with all parties to discuss the project and determine what they wanted to see for the lighting design. Through these meetings, they established four goals:

During the planning phase for the event, Hons continued to meet with KSU’s Bob Louis (Executive Director, Creative Services) and Larry Langston (Graphic Designer, KSU University Communications and Marketing). Their discussions helped to distill how the event would flow and what sort of lighting would be required throughout the pre-game ceremonies. The KSU Marketing department produced a short video that would play on a kabuki drop rigged by VLS. As the event drew closer, VLS produced pre-visualization renderings and secured a reliable kabuki mechanism from Rent What in California. The VLS team created lighting layouts and plots using Vectorworks, to help the client visualize the effects, as well as keep all members of the event team on the same page.

In the days leading up to the event, the entire rental and production staff at VLS Cleveland contributed to the effort by performing preventative maintenance on fixtures, safety checks of the rigging equipment, and pre-programming the control console before finally packing the truck. The ETCP-certified team’s experience in both Electrical and Rigging alerted them to any potential issues well ahead of time, as well as gave them experience to prevent issues, adding to audience safety.

With the rigging and lighting equipment packed, the VLS crew set out in the early evening for Kent State University. Arriving on campus there was much work to be done inside the MAC Center. The first order of business was establishing the 29 rigging points required and hanging the 17 Columbus McKinnon 1 Ton chain motors as well as 12 quarter ton CM Prostar chain hoists. To plan properly for this job, during the Planning process, VLS called on the rigging expertise of Andrew Rowlands, a former KSU student familiar with the arena. “I’ve walked the [MAC Center] beams for over 13 years. I’ve done concerts, graduations, a presidential inauguration, hypnotists, comedians… I came up as a student and have continued to work with their students,” Rowlands explains. “The grid in that room has quite a few minor beams that should not be rigged to. They wiggle when you walk on them. In most cases we were up against the plates that join the beams together. The rig just fit in the configuration we were in.”

The rigging supported more than 300 feet of Total Structures 12” box truss. An 18-channel Lex Products distribution box provided all of the power for the 60 kabuki drop solenoid heads and 24 Clay Paky fixtures. Nine hours later, at 3AM, the crew had the rig hung and tested, including the first double kabuki drop.

“I was nervous about the kabuki drop, as I’ve had bad experiences in the past,” Derek Hons, VLS Production Manager confided, “but it never failed.” Indeed, throughout two “dark days” for testing and programming, the kabuki drop would be tested 10 more times before the first rehearsal. While VLS lead programmer Scott Latham tweaked the lighting cues, Andy Carr and Ted Van Hyning of NPi Audio Visual Solutions focused projectors and tuned the temporary audio system which would be used during the pre-game show. This time also included meetings and coordination with the house staff at the KSU MAC Center. By integrating the house staff with the rest of the team, VLS ensured that house lighting and the permanent arena PA system could seamlessly work with the production. By allowing time for two dark days, plus one day of rehearsal, the united team was ready for the show.

Throughout the planning, load-in, and rehearsal schedule, our team had to coordinate with school officials to accommodate the busy schedule of a very active university athletics facility. Regular check-ins with facility manager Jamie Felcher helped the VLS Production staff work around potential conflicts with volleyball games and gymnastics events. All rigging had to be performed when student athletes would be out of the building, and the arena could not be darkened during scheduled practices.

The outdoor lighting at the student VIP entrance had to be installed on game day. 12 Glow Ups and two dozen LED uplights were placed to enhance the MAC Center façade. Igloo enclosures were used to house Clay Paky moving lights performing a search beam effect outside the venue.

The intense cohesive beams of the moving lights beckoned to college sports fans to the MAC Center across the campus. As students and sports fans approached the entrance, they were greeted by an architectural lighting display shimmering in the Kent State Golden Flashes’ signature blue and gold lighting scheme.

Inside the arena, VLS Technicians Kristin Jones, Adam Feig, and Dylan McFarland were performing final system checks as Lead Programmer Scott Latham prepared to operate the control console. From walk-in to performance, to lights out, the evening’s cues would be called over intercom by KSU’s TJ Christie, Director of Revenue Enhancement and Fan Engagement. At his signal, walk-in lighting cues were triggered, audio cues were played back, and video rolled just as planned in the rehearsals. 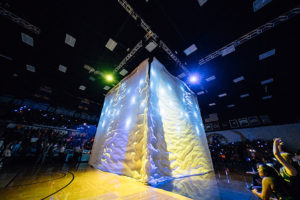 Cues had to be called to begin announcements, and to trigger the beginning of the pre-game show. It opened with team colors spinning throughout the arena, and then ballyhoos preceded the double kabuki drop and a speech from KSU President Beverly L. Warren. The first drop would reveal the silk curtains as the arena dimmed for the video. At the conclusion of the video, the lighting returned to ballyhoos and the kabuki curtains dropped to the floor to reveal cheerleaders and the Kent State University Mascot standing at mid-court. During all three performances, the cueing and release solenoids performed as planned, thanks to the days of preparation leading into the event.

VLS was originally scheduled to perform the show for two consecutive nights of men’s and women’s basketball games. Based on the success, audience reaction, and demonstrable repeatability, the KSU Athletics department asked the team to reassemble for another men’s game later in the season. The entire rig had to be reassembled and loaded back into the MAC Center. This time, though, the testing and programming would proceed much faster, since the original cues were still saved at the VLS – Cleveland office. Based on the success of these events, the team is looking forward to our next collaboration. 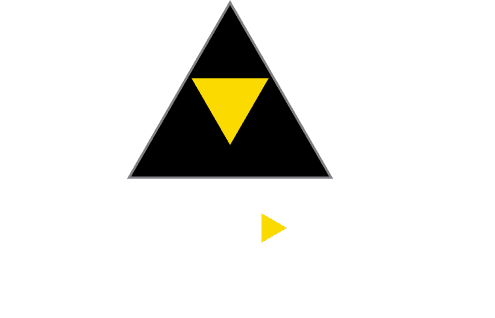 Thank you for your interest in our Company Brochure. Please tell us a little about yourself, then the download will be available.

Thank you for your interest in downloading The Fundamentals of TV & Video Lighting. Please tell us a little about yourself, then the download will be available.

Thank you for your interest in downloading Architectural LED 101. Please tell us a little about yourself, then the download will be available.

Thank you for your interest in downloading Rigging 101. Please tell us a little about yourself, then the download will be available.

Thank you for your interest in downloading Architectural LED 102. Please tell us a little about yourself, then the download will be available.

Thank you for your interest in downloading LED 101. Please tell us a little about yourself, then the download will be available.

Thank you for your interest in downloading Lighting 101. Please tell us a little about yourself, then the download will be available.

Thank you for your interest in downloading Lighting 102. Please tell us a little about yourself, then the download will be available.